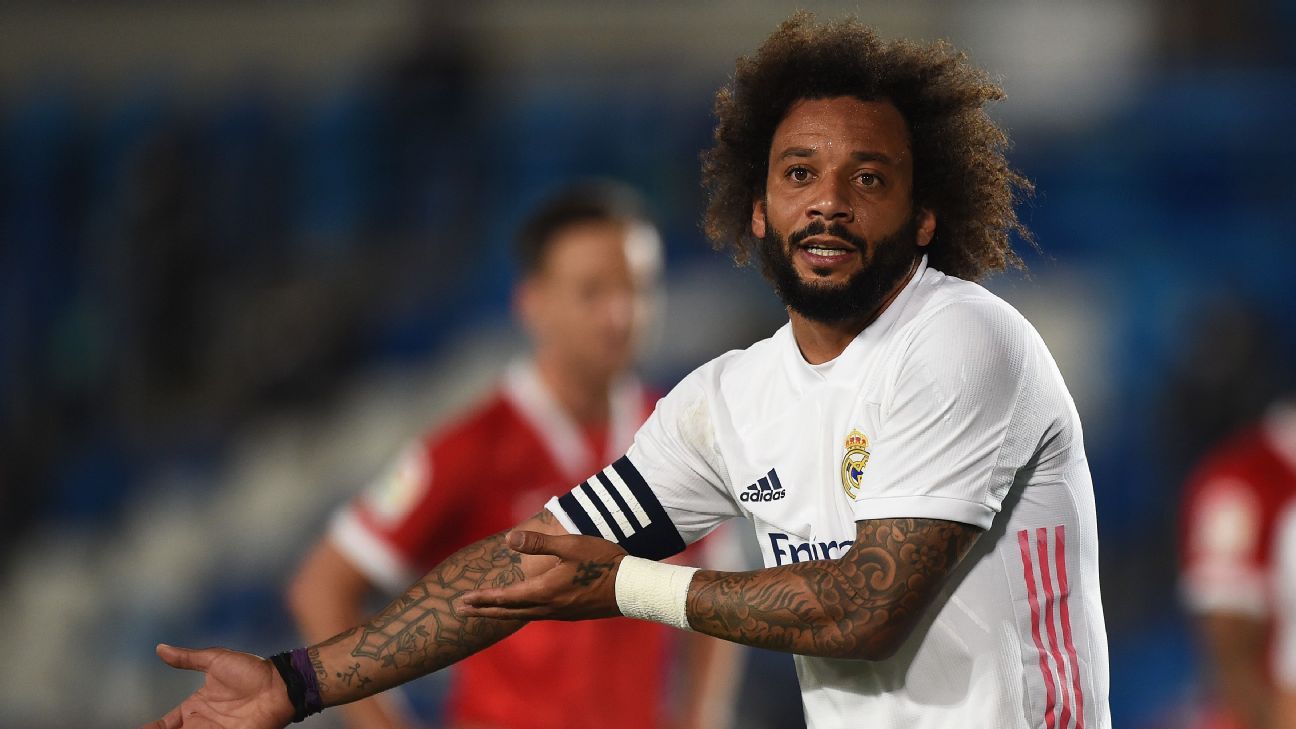 Zinedine Zidane has denied that a training ground row with Marcelo caused the defender to be left out of the Real Madrid squad for their 4-1 La Liga win at Granada on Thursday.

With the Brazilian absent from the travelling party and first-choice Ferland Mendy injured, it was left to 19-year-old left-back Miguel Gutierrez to make his first start — and the youngster responded by creating Madrid’s opening goal for Luka Modric.

“Marcelo had some discomfort, and as always we didn’t want to take a risk,” Zidane said, when asked about claims — first reported by Goal.com — that an argument with the coach had led the player to be dropped.

Veteran Marcelo, who is one of the team’s captains, has lost his place in the Madrid starting XI to Mendy this season and faced criticism over his form and fitness.

The 33-year-old started in Real Madrid’s 2-2 draw with Sevilla FC on Sunday — a result which left their title hopes in serious jeopardy — but was hauled off after 66 minutes, to be replaced by Gutierrez, who got the nod on Thursday.

“Marcelo’s discomfort is why he didn’t travel with us, that’s all,” Zidane insisted when pressed on the issue in his post-match news conference.

Rodrygo Goes, Alvaro Odriozola and Karim Benzema also scored in a straightforward win over Granada that left Madrid two points behind leaders Atletico at the top of the La Liga table.

“We’ll keep going. We have two games left. Until the end, until the last minute when the league is over, we’ll give everything, like today, and we’ll see,” Zidane said.

Real Madrid visit Athletic Bilbao on Sunday, while Atletico host Osasuna, before Madrid play Villarreal and Atletico travel to Valladolid on the last weekend of the season.

“The only thing we can do is keep putting pressure on Atleti and hope that they don’t win one of their two games,” goalkeeper Thibaut Courtois said. “We have to show that we’re there to win, that we’re close, and that they have no margin for error.”

Atletico beat Real Sociedad 2-1 in a tight, nerve-wracking win on Wednesday, after rivals Barcelona had dropped points in a 3-3 draw at Levante a day earlier.

“I didn’t see the [Atletico] game,” Courtois said. “Everyone does their own thing, they won, so they’ll feel strong. All you can do is look at yourself, we have a difficult game on Sunday in Bilbao, and then after our game we’ll look at their result.”