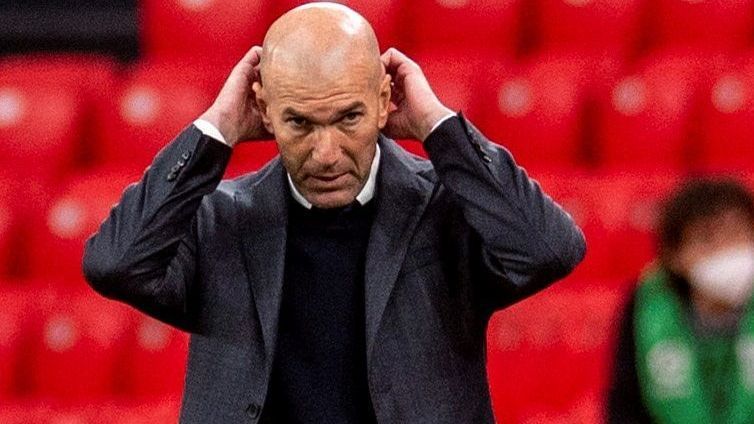 Real beat Villarreal 2-1 in their final game of the La Liga season on Saturday, but that wasn’t enough to overtake rivals Atletico Madrid, who secured a dramatic 2-1 comeback win at Real Valladolid to clinch the trophy.

Speaking after the match, Zidane said he was “p***ed off” at failing to retain the title and would hold talks with the club “in the next few days” to determine the way forward.

ESPN reported last week that Real wanted Zidane to see out his contract until 2022 but were already making plans for his departure, with Massimiliano Allegri and club legend Raul being considered as replacements.

In recent months, Zidane had refused to commit to remaining in the job next season, leading to widespread speculation that he was planning to leave.

“You might think I walk away from responsibility or leave when things get complicated, but no, never,” Zidane said on May 15 when pushed on his future. “What I do is give everything, to the end, and then the moment comes to change… I don’t leave because it’s easy. There are moments when you have to stay, and others when you have to go.”

Zidane later dismissed reports that he had already informed his players of his intention to quit, calling them “a lie.”

“How am I going to say to the players that I’m leaving now? We’re fighting for the league, and I say that I’m going? Why would I say that? At the end of the season we’ll see what happens,” he said after Madrid’s 1-0 win at Athletic Bilbao on May 16 in their penultimate La Liga fixture.

However, sources told ESPN that the feeling among the squad was that Zidane was likely to depart, with talks planned with the club at the end of the season.

Before that, he spent five years at the club as a player, worked as an assistant to Carlo Ancelotti, and coached B-team Castilla before being offered the first-team job in January 2016.

Zidane’s laid-back style, with a focus on man-management, proved popular with the players, although some at the club doubted his tactical acumen.

He first resigned in May 2018, saying he believed the squad would benefit from a change of coach.

An atypical 2019-20 season — with a three-month La Liga hiatus due to the COVID-19 pandemic — ended in triumph with another league title win after Zidane’s side won 10 of their final 11 games post-lockdown.

Financial restrictions saw the club decide not to spend on new signings last summer, and the start to this campaign proved more difficult both domestically and in Europe.

In La Liga, Madrid suffered an embarrassing 1-0 loss to newly-promoted Cadiz in October, and were beaten 4-1 by Valencia and 2-1 at home to Alaves in November.

In Europe, the team narrowly avoided being eliminated from the Champions League group stage for the first time in Real Madrid’s history.

There were questions over Zidane’s team selection and rotation policy as well as his suitability for managing the transition from a group of experienced winners to a new generation of players.

In January, the former France international’s job was at risk after being knocked out of the Spanish Supercopa and Copa del Rey, while a La Liga defeat to Levante left them 10 points behind leaders Atletico.

However a new-year surge saw the team recover to go 18 league games unbeaten.

Madrid’s progression to the Champions League semifinals — where they were knocked out by Chelsea — was seen as creditable, given the limitations of the squad and the number of injuries they had faced throughout the season.

Zidane had never previously gone a full season in charge without landing any silverware, but Atletico’s last-day La Liga triumph on Saturday meant he ended the 2020-21 campaign empty-handed.