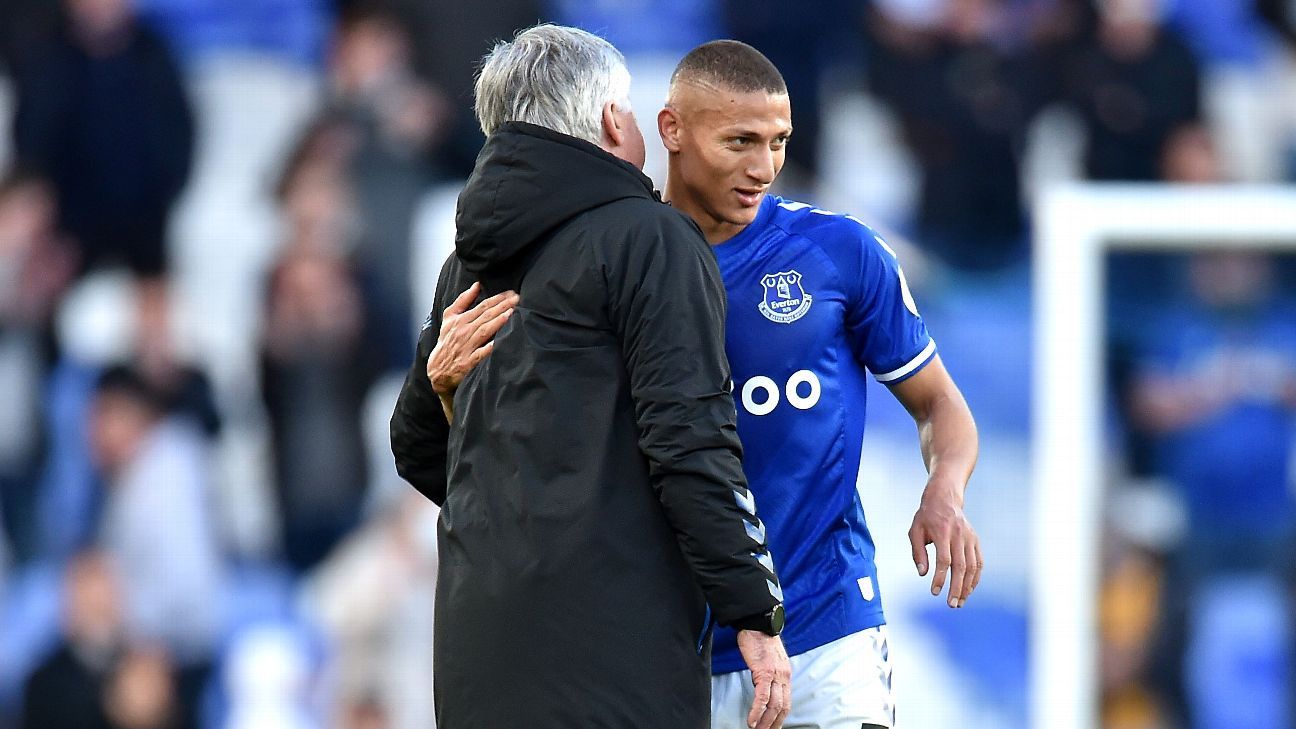 With most of the major European seasons now complete, the rumour mill has been sent into overdrive as clubs ponder their moves ahead of what will be a busy transfer window. Check out the latest gossip below, and see all official deals here.

Everton forward Richarlison is on Real Madrid‘s radar, with Football Insider reporting the Brazil star could be reunited with Carlo Ancelotti at the Bernabeu.

Following Ancelotti’s switch from Everton to Real Madrid earlier this week, Ancelotti now wants to take Richarlison with him to La Liga. The Toffees are willing to listen to offers if he was to push for an exit. Just over a year ago, Everton reportedly rejected a reported £85 million offer from Barcelona.

Everton are said to have funds to spend this summer but it could become a balancing act with financial fair play rules. This would require the club to move some players on before they make some signings with the Brazilian falling into that category should he want to leave.

The 24-year-old still has three-years left on his deal, though 10 goal involvements in 34 appearances might not get Madrid fans excited.

It wouldn’t be the first time that Richarlison has followed his coach from one club to another. He joined up with Marco Silva at Everton after leaving Watford in 2018.

Bale has a year left on his highly paid contract at the Bernabeu after spending last season on loan at Tottenham.

The forward has refused to comment on his plans for next year until after the Euros, saying “I know what I’m doing but it will just cause chaos if I say anything.”

Bale got on well with Ancelotti during the coach’s previous two seasons in charge, scoring in Real’s Champions League final and Copa del Rey final wins in 2014.

08.30 BST: The Times is reporting that Wilfried Zaha is determined to leave Crystal Palace this summer and wants a new club by the time preseason training begins.

Zaha, 28, feels the time is right to find a new challenge after manager Roy Hodgson left the club this month. The Ivory Coast international has been at Palace for almost all his career, save for one season when he was at Manchester United and also loaned to Cardiff City. The rest of his time at United was spent on loan back at Selhurst Park.

With two years remaining on his contract, Palace will have to sell this summer if they are to get full value. He has been tracked by Arsenal and Everton in previous summers, but Palace wanted too much money due to Man United holding a 25% sell-on clause for any fee.

Meanwhile, Palace yesterday announced that striker Christian Benteke has signed a two-year contract extension, committing him to the club until 2023.

– With sources telling ESPN’s James Olley that Antonio Conte is in talks to manage Tottenham Hotspur next season, the Italian coach is reported to want AS Roma defender Alessandro Florenzi. According to Calciomercato, the 30-year-old is a big admirer of Conte and would be willing to make the move. The full-back is set to return to Roma following a loan stint at Paris Saint-Germain, and a permanent switch to the French capital seems unlikely. Spurs would be able to strike a deal for €10m this summer.

– Roma are looking to sign midfielder Teun Koopmeiners, according to Gazzetta dello Sport. The 23-year-old is viewed as a promising young talent and his desire to play under Jose Mourinho has fueled the possible move to Rome. However, talks are not yet at an advanced stage. The Netherlands international has had an impressive season at AZ Alkmaar, netting 15 times in 31 league appearances. His stock could rise further at Euro 2020.

– Juventus and PSG are in the race to sign Sassuolo midfielder Manuel Locatelli this summer. Gazzetta dello Sport reports that the 23-year-old is seen as ready for the next step up in his career, becoming an ever-present force in his side’s midfield with 34 league appearances. For Juventus, the player is seen as filling a vital role in the heart of Massimiliano Allegri’s plans going forward. Sassuolo are said to value the player at €40m and are in no rush to move him on until after the Euros.

– Arsenal have made a £30m offer for Norwich City’s Emiliano Buendia according to The Sun, but they aren’t the only club monitoring the player this summer. The Gunners are said to expect competition from Aston Villa for the 24-year-old who impressed in the Championship again last season, helping his side achieve promotion at the first time of asking. However, the Canaries are not in any rush to move Buendia on, insisting they would not accept anything below the £40m mark.